Difference between revisions of "Programming STM32F411"

This article is about programming the ARM development board Nucleo-64 STM32F411 by STMicroelectronics. The development environment is Eclipse 4.6.2 (a.k.a. "Neon.2") with the GNU ARM Eclipse plugin running on Ubuntu Linux. If your GNU ARM toolchain is the latest version directly from ARM, then you will have problems debugging in Eclipse because the Eclipse debugger is not able to suspend or terminate the debugging session. You can work around this problem by either debugging manually from the command line or by using Eclipse 4.5.2 (a.k.a. "Mars.2"). It is expected that the problem will be fixed in Neon.3.

I am combining the knowledge I obtained from various sources like the official documentation by ARM Ltd., the tutorial by Patryk Jaworski, where he shows us how to program a Nucleo development board with an STM32F401RE processor by using the GNU ARM cross-compiler and the CMSIS library extracted from the STM32CubeF4 software bundle, the tutorial by Benjamin Vedder, who shows us how to set up the Eclipse debugger for STM32F4 to work with OpenOCD, and a discussion on StackExchange about how to use GDB with OpenOCD

We will be using CMSIS, HAL and assembly code in our program. Fortunately we don't need to extract CMSIS or HAL from the STM32CubeF4 bundle, like Patryk did in his tutorial. The STM32F4xx template project in the GNU ARM Eclipse plugin includes the CMSIS and HAL libraries.

Note that the Nucleo boards do not include a programmable bootloader and ARM Cortex-M usually don't have an integrated bootloader, unlike the ATmega processors used in Arduino boards. The uploaded program therefore gets wiped when power is cut off.

In the picture on the left, the top part of the board is the ST-LINK/V2-1 debugger/programmer for STM32 microcontrollers. It has SWD (serial wire debugging) pins. It can be used to program ARM processors on other boards by connecting the SWD pins (the 6 headers on the left) to the appropriate pins of the other board.

The picture on the right shows the two-piece support structure that I designed to relieve the pins on the bottom side from physical stress. The 3D model of the support is included with the project files.

Building and Uploading a Program

Building with the Mbed Web IDE and uploading with st-flash

The Mbed web IDE can be used to create an executable binary program that is downloaded from the website and uploaded to the GPU.

where 0x8000000 is the address at which the flash memory region starts on STM32F4 chips. Our program needs to be uploaded into this memory region in order to be executed after a system restart. Note that the st-flash tool is part of the stlink project on GitHub and not installable from the Ubuntu 18.04 repository.


Building and uploading with Mbed-CLI

Another tool for creating an Mbed project, for building it, and for flashing the generated binary is the tool mbed, which is part of the Mbed Command Line Tools and installed the Python package manager PIP. Unfortunately, the flashing function of mbed requires that the project is completely handled by the mbed tool.


Building with GNU MCU Eclipse and uploading with OpenOCD 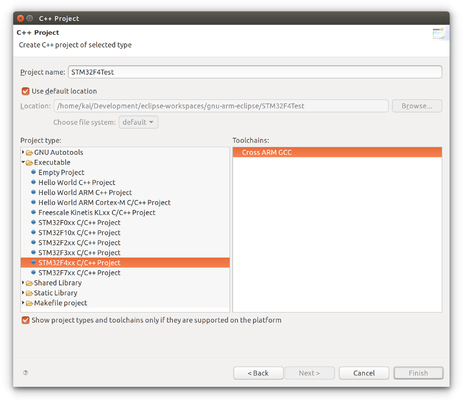 OpenOCD is a command-line tool for flashing binaries onto microcontrollers. Open a terminal window and type

where <path to build results folder> needs to be replaced by the path to the build results folder (= <project folder>/Debug for debug builds). OpenOCD will use the specified configuration file for STM32F4 Nucleo boards and execute the given commands to transfer the ARM program corresponding to STM32F4Test.elf, verify the transferred binary, reset the microprocessor so that the program starts from the beginning, and exit execution after closing its connection to the board. The program will continue running on the board after OpenOCD exits.

and waits for the telnet connection on port 4444. In the second terminal you just type

to connect to OpenOCD. Now issue the commands

to load and run the generated program. Note that the working directories are the same in both terminals so that relative file paths can be used. Also note that we enabled ARM semihosting, which binds the I/O of the program that runs on the ARM processor to the I/O of the terminal that we are running OpenOCD from. Otherwise we would not be seeing the debug (trace) messages in the first terminal.

To disconnect the telnet client from the OpenOCD server, type

The OpenOCD server and the ARM program will keep running. You can connect again with a new telnet session. To stop the server (and the program), press Ctrl+C in the first terminal.

First of all, you should make sure GDB for ARM is installed. Either install from the default repository

Note that your working directory does not matter when starting OpenOCD. In the second terminal, start GDB, connect to the OpenOCD server on port 3333, load the program and run it:

Here we use the GDB command monitor to send messages (usually commands) to the remote target. The line "monitor arm semihosting enable" is needed for continue to work. After continue, use the GDB commands to pause execution (Ctrl+C), set breakpoints, inspect stack variables, and so on.


Setting Up The Eclipse Debugger

Read the instructions in the GNU ARM Eclipse documentation. In our case, the Config options string that needs to be entered is -f /usr/share/openocd/scripts/board/st_nucleo_f4.cfg. 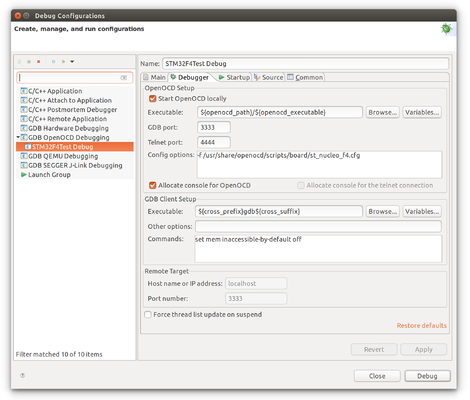 Pin #7 on the outer left male header row CN7 is the BOOT0 pin. Pin #5, right next to it, is VDD. So, in order to enable writing to the boot memory via USB we simply cap these two pins with a jumper. The bootloader thus switches to DFU mode after resetting the STM32. USB data wires D+ and D- need to be connected to pins PA12 and PA11, respectively. PA11 and PA12 are located on the male header row CN10 on the right side.

DFU bootloader configuration for STM32F411 according to ST application note AN2606